Force Something & It Will Break .: Auto-Repair Patience

Every once-and-a-while, I like to tap into some of those technology + mechanical skills I learned, or somehow inherited through imitation and/or osmosis, growing up on a farm in rural Nova Scotia. 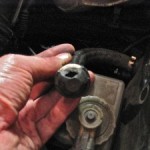 Some of you may already know that I grew up on a farm, some may not .: either way, you do now! Back to the story .: I decided to take a crack at getting my near antique BMW e30 Touring (wagon) ready for it’s annual journey to the local AirCare shop down on SW Marine Drive in Vancouver. I was ready this year, I had researched the best procedure to remove + clean + re-install the fuel-injectors. I Googled, I YouTubed, I Learned. I’m very fortunate to have my own small garage here in EastVan to tackle such a delicate + tedious project in relative peace & security. In the past, when I’d attempt a project like this one, I’d often start out slow, then get sloppy and suddenly create self-induced chaos by either braking something or often worse .: loosing/misplacing some critical piece along the way. Not this time, no way – I was prepared. I even has the new The National album “High Violet” streaming through my old-skool garage iPod system. Life ≈ good!

Fast-forward to 10pm that Monday evening. The tedious fuel injector extraction project was moving along just-nicely .: but there was just-one-electrical-connector (in auto-repairs, there’s always one sticky-bit…) that was limiting my ability to easily remove the entire fuel-injector rail assembly. My gut was telling me that there was something very simple keeping that electrical connector anchored in place .: yet my head was telling me to just twist + pull + turn harder > quickly followed by snap-cracked-pop…whoa! An important lesson here, in auto-repair & larger-life-in-general:

“Almost invariably, when one forces anything .: more-often-than-not something breaks”

This unwritten law of da universe seems to apply to just about everything, at least to just about everything I’ve attempted in life (work | relationships | creativity | music | hacking | etc…). Yup, force something and it will invariably break. Understand the nature of that same something + how it works, and seemingly miraculously, things pretty much open themselves up to you. 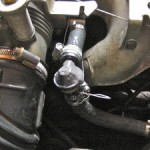 Anything can be fixed .: Merci J-B Weld epoxy!

The point, or at least one point to this auto-repair-tale, is that what was at the time a rather reptilian impulse to force a solution vs. understand the problem, led to an entire extra day of my time being taken up attempting to solve a problem of my own creation. Numerous unsuccessful calls to auto-wreckers + specialty-auto-parts store later, I decide that the best short-term solution involved a few tubes of the truly amazing J-B Weld epoxy. After slowly & painstakingly building up layer-upon-layer of adhesive, followed by 24+ hours of hardening + drying, my old BMW e30 Touring fired up on the first turn of the ignition. So yeah, anything can be fixed, but why bother fertilizing the chaos?